That’s a Wrap 2022! A Message from our Executive Director

That’s a Wrap 2022! A Message from our Executive Director

In 2010 when we founded WRC, there were few entrepreneurial support resources in our home region and “IoT” as a buzzword was in its infancy.  In fact, we didn’t add the RIoT brand and services until 2014.  As we approach the close of 2022 and approach our 13th anniversary next year, it is worthwhile to take a look back and recognize a number of huge milestones achieved by those first risk-taking organizations that bet on the Tech + Entrepreneurship equation before the market had been validated. 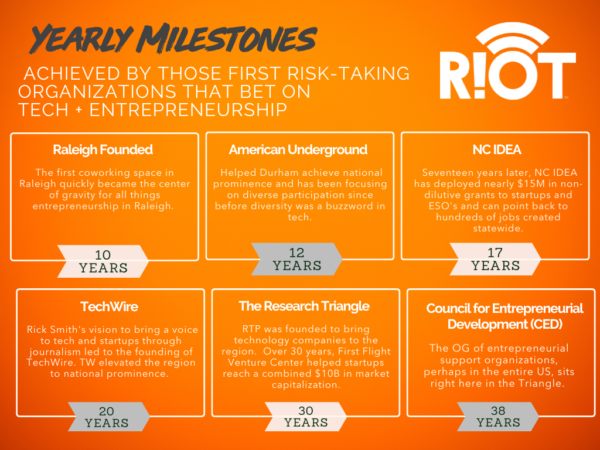 10 Years:  Raleigh Founded, the first coworking space in Raleigh quickly became the center of gravity for all things entrepreneurship in Raleigh.  RF catalyzes serendipitous connection and inclusive relationship-building that led to dozens of companies graduating from the space and populating the region (and in the case of Pendo, building high rise headquarters).

12 Years:  While talking about inclusive coworking communities, we should also give kudos to American Underground, who similarly helped Durham achieve national prominence and has been focusing on diverse participation since before diversity was a buzzword in tech.

17 Years:  NC IDEA recognized early that small amounts of capital, equitably deployed, can have an outsized impact on our community.  Seventeen years later, NC IDEA has deployed nearly $15M in non-dilutive grants to startups and ESO’s and can point back to hundreds of jobs created statewide.  A best-in-class playbook and differentiating resource for North Carolina.

20 Years: Rick Smith’s vision to bring a voice to tech and startups through journalism led to the founding of TechWire.  TW elevated the region to national prominence.  The broader WRAL team continues to be a trusted voice across North Carolina and blazed a path for TBJ, GrepBeat and others to follow.

38 Years:  The OG of entrepreneurial support organizations, perhaps in the entire US, sits right here in the Triangle.  The Council for Entrepreneurial Development (CED) has helped more than 7,000 startups to raise $6B and continues to be a go-to resource, adding new programs like the Gro Accelerator in the past year.

Ratings organizations of all kinds continue to rank Raleigh and Research Triangle as a top place for business and entrepreneurship.  In this season of giving and thanks, I encourage everyone to reach out to the “Founders” of entrepreneurial support in NC and ask how you can get involved.  I also want to thank my own team here at RIoT, who work hard to make a positive impact every day.

I hope everyone has a great holiday season.  I look forward to coming back in January with some predictions about the coming milestones in entrepreneurial support!